Hey everyone! We got back yesterday (Sunday morning) 10am UK time (about 2am in the morning California time I think) and had to try and stay up until UK bedtime that night. We failed to do that and ended up falling asleep for a few hours haha oh dear. I’m hoping my body clock sorts itself out as I’ve got a new job to start tomorrow, I might have to snort some Nescafé as I’m having trouble using my brain to even write this post right now.

Anyway our Roadtrip was so cool we both loved the USA and I’ve got tons of photos to go through – I’ll start with the 11.5 hour flight from Heathrow to Los Angeles with a good old Gin and tonic and some pretzels flying with Virgin Atlantic. The film choices on the flight out were pretty good I watched Anchor Man 2 (no where near as funny as the first film) and The Hobbit: The Desolation of Smaug which was OK (I was spoilt with the book from years back so expected a bit more). Leigh watched Greys Anatomy on her little iPad (I think she watches it because she likes the doctors). Leighs parents also surprised us by pre-booking us a bottle of Champagne on the plane for our Wedding anniversary.. I take back everything I said about my mother in law haha! Thanks Colin and Linda.

The flight took us over Greenland which was pretty cool! 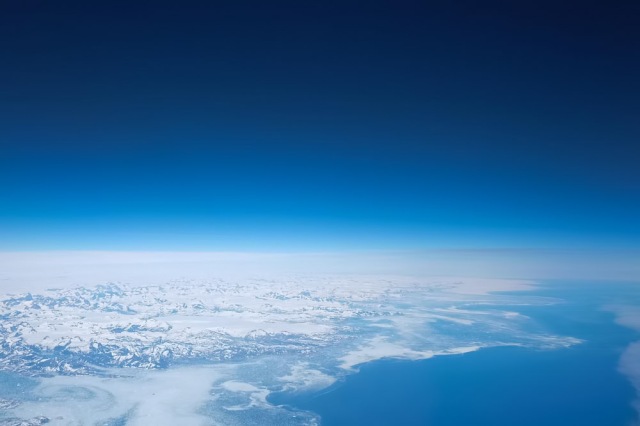 As well as Canada.. before landing in LA you can see the LA skyline in the latter photo. 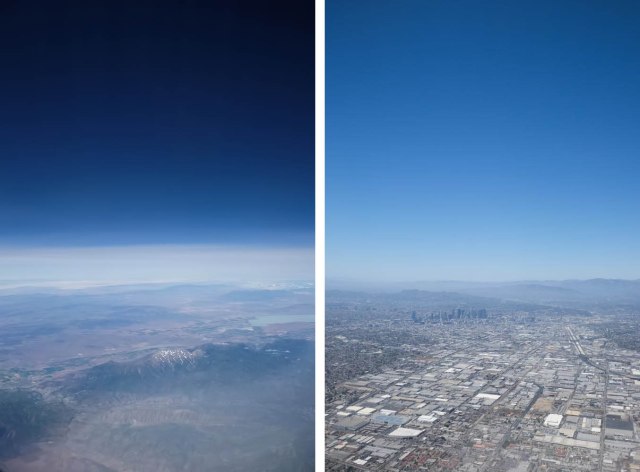 So after arriving in LA we picked up the hire car from Alamo (I’ll show you a photo later). I ended up choosing a smaller SUV than originally planned as the size I originally booked could have used as a Winnebago with the boot hired out to a herd of travelling elephants. Then after being awake for about 15-16 hours from the previous day I attempted to drive to our hotel on the wrong side of the road on the wrong side of the car for the first time. We arrived alive with minimal finger nail marks in the dash of the new hire car.. phew.

Our hotel was the Magic Castle Hotel in Hollywood, walking distance from a lot of famous sights. The price was excellent, the staff were awesome and it came with unlimited soft drinks, snacks and breakfast! If you stay in LA I’d highly recommend this hotel. Here are a couple of photos of the view from our balcony and the main living area and the fully equipped kitchen. The balcony over looked the pool (which by the way was open 24 hours a day and night swimming was encouraged). The hotel staff  had also left us a card, a bottle of Californian wine and a little fruit basket as they knew it was our wedding anniversary, cheers!

So what do you first when arriving in the USA? That’s correct you go and eat a big ass burger and we had heard loads about In-N-Out Burger. It’s actually listed as ranking number 4 out of 8549 restaurants in Los Angeles on Trip Advisor! It didn’t disappoint, while I’m sure it’s not the best burger you can get in LA it’s by far the best fast food burger I’ve ever had you should try these out if you get chance (I wish I could have brought one home for my buddy Paul Summers, he loves pretty much any animal wrapped in a bun). Even the fries are made from actual fresh potato on site (what a novelty!).

Look how happy Leigh is after trying my burger! 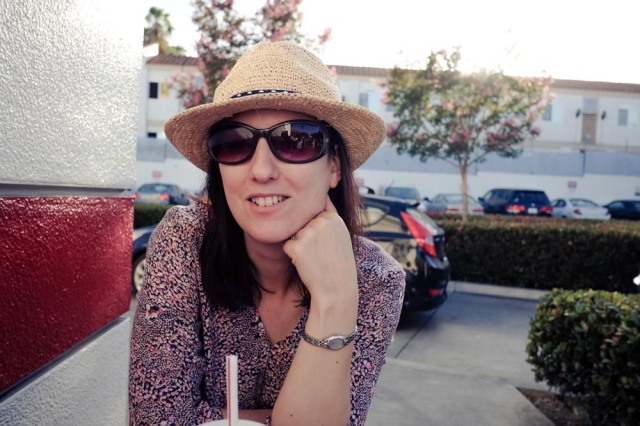 So the next day we walked down to our first your of our holiday, a bike tour in LA. On the way their we walked along the Hollywood Walk of Fame looking for our favourite stars and we stopped in a cool little bar to watch some World Cup footy.

The LA bike tour was interesting the fella running it turned out to be a bit of a character (just maybe not in a good way). I’d usually link the company here but in this case I couldn’t recommend this particular tour so I’ll skip it. Their was no introduction to the bikes – but hands up if you know any differences between UK & US bikes? If you answered anything other than the brakes are round the the opposite way then you’re wrong. So the first time I need to stop rather quickly I yank the front brake harder than the rear and go flying like superman (but without wearing my pants on over my trousers) soaring right over the handle bars. I didn’t actually twig that the brakes were round the wrong way until we hired more bikes later in San Francisco and the guy ran through an introduction. At the time I just thought I was an idiot, which I am a little bit. No one got a photo of this short flight over the handle bars unfortunately but I was assured by afore mentioned idiot LA bike tour guy that it looked pretty impressive.

Anyway Los Angles is a cool place – it’s a huge place with so much to see I think we rode about 25 miles that day. We were joined by a lovely Australian lady called Minda (which I have since found out is slang for like idiot in Australia so not sure if she was having us on). Here’s some photos of LA, the second photo below being Capitol Records who recorded and released material by artists like Dean Martin, Nat King Cole, Frank Sinatra, The Beatles and The Beach Boys.

Hollywood Tower listed on the National Register of Historical Places, famous for being a residence for entertainment industry employees and for being the inspiration for the Twilight Zone Tower of Terror.

On to Camp Hollywood Land and the hills.

And the original Batman Cave in Griffith Park where the Batcar was shown entering and leaving!!

Out of the other side of Bronson Canyon and the cave is a nice view of the Hollywood sign – this area was actually used to film various scenes in films such as Star Trek VI: The Undiscovered Country and Cabin Fever as well as episodes of the A-team, Bonanza and Dukes of Hazzard. 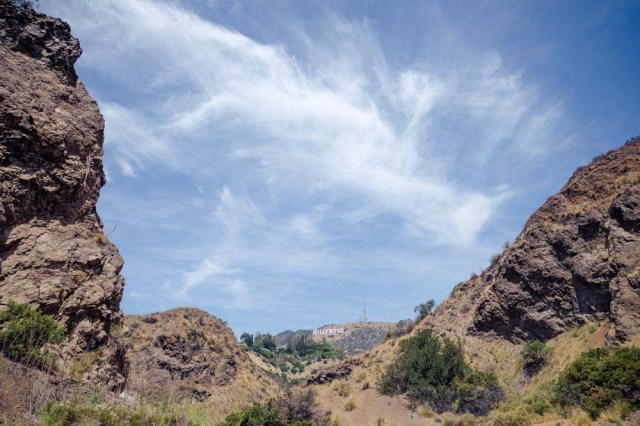 Cue cheesy shot of us in front of the Hollywood sign.

We then cycled back into central LA.

The house above was used in a famous film but I can’t remember which – anyone know?

Dolby Theatre where the Oscars award ceremony is held.

Grauman’s Chinese Theatre famous for the concrete hand and foot prints and signatures of various celebrities.

The Rainbow Grill on Sunset Strip famous as a place where stars such as like Elvis Presley, and The Beatles used to hang out.

We stopped off for a glass of Ben’s homemade lemonade being sold by the roadside in a really posh part of Beverley Hills.

A Bugatti Veyron – I think they originally cost about 1 million dollars new! 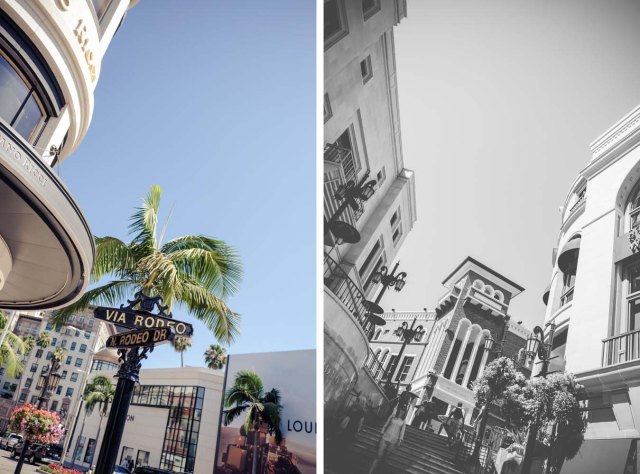 After the bike tour we went to Hooters for a bite to eat & a much deserved beer\cocktail the venue wasn’t my suggestion and I was forced to have my photo taken with the Hooters waitresses and Minda.

We walked home to our little hotel room a bit merry and ordered a lovely pizza. We woke the next day feeling like we’d run a marathon. Our little legs weren’t happy with us for the 25 mile bike ride..  on to Santa Barbara next time.