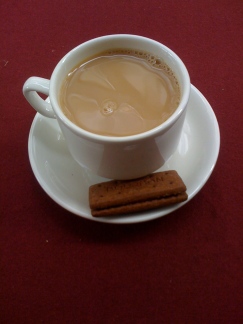 I was reading a blog post today on British foods by Two Travelling Texans and thought about that we all sometimes have some really funny preconceptions of what we imagine different nations eat on a regular basis. For example back when I was at school I imagined the French across the channel gorging themselves on snails and croissants washing it all down with un café. In fact our French friends do actually eat\drink a fair amount of these three things, but my point is that we miss out on a lot of French cuisine as it’s much broader and we only usually hear about the foods\drinks that we experience as tourists unless we spend time with families in said country.

Anyway I’m rattling on a bit but the blog post on British foods made me think about something that I think is an integral part of being British but is sometimes missed Tea & Biscuits, which of course is a very serious subject! So lets start with some back round information, it wasn’t until the 19th century that us Brits started to dunk biscuits in our cuppas apparently but now we consume well over 4 million biscuits every day in the UK. If you visit any English household you’ll pretty much find you instantly have a nice cup of tea with a biscuit on the side thrust into your hands whether you like it or not.

Lets sort something out right now as there are fairly clear, very important rules to what makes a proper dunkable biscuit.

These are the most important rules, if you stick to these you’ll not go far wrong. For example a Jaffa cake almost fits these rules, it certainly ticks the boxes for number 1 and 3 but number 2 is where the problem starts. Jaffa cakes are spongy and don’t dunk well, the texture is all wrong once they are wet!! So the rules dictate that it’s not a biscuit, don’t get me wrong I love a Jaffa cake or three even with a cup of tea but just don’t try and dunk it.

Here’s my standard biscuit top 5, I say standard as I’m not including posh biscuits in the run such as Marks and Spencers or Foxes Double chocolate cookies, although personally I think cookies go a little better with milk.

The astute among you probably noticed the 6th entry.. I couldn’t leave out Nice biscuits. Lastly but just as importantly lets not forget bad quality tea ruins the experience, there is no list here Yorkshire Tea is the king (or queen).

I feel like I’ve been a bit serious today so here’s a photo of an amusing Llama. You can tell how seriously he takes his biscuits though, he would not stand for a pink wafer with his cup of tea.