Heyyyyy… so it’s raining cats & dogs here in England today. We have the ex-tropical hurricane Bertha moving coming to visit us, who makes up these names for hurricanes anyway? They always make weather sound like soooo much fun with these names “Hey everyone you know that party we have planned for the weekend? Well lets invite Bertha – she’s awesome! Yeahhhhhh, whoooooo P-A-R-T-Y!”. I think they should get a new weather naming guy – then we’d have names maybe such as “Dave the Destroyer”, much better eh? Who would want him at a party, he’d break stuff and spill his drink on the rug.

Moving on swiftly, seven weeks ago we were in lovely California sunshine driving along the Pacific Highway towards our next destination- cut to dreamy sequence and wobbly screen transition….

….you can make out Santa Barbara pier in the distance – it’s a very beautiful place. This photo was taken just after arriving at The Harbor View Inn, a lovely hotel which has a perfect location right on the sea front. Although it wasn’t cheap. There’s plenty of over sea view hotels but we booked our Santa Barbara hotel a little late so had less of a choice.

The view from our room – fab.

Bit of a walk and then time for a cocktail and a beer me thinks. A mojito and a California amber beer with a hint of honey).

Then off for lunch – I think I have like Trip Advisor restaurant OCD or something as I hardly ever eat in towns, cities without checking if their is a super duper restaurant near by. Leigh think’s I’m weird.

Check out the two cars on the pier – not sure what the first blue car is but the second I think is a Dodge Challenger T/A 340 Six Pack (Ok I Google’d the writing on the side of the car so I could look clever bahahah! I actually don’t have a clue). Your impressed right? Thought so. If ya look closely you can see the chap in the Challenger gave me a peace sign as I took the photo – anyway cool car bro. If you or your buddy happen to stumble upon my blog andwant a copy of the photo let me know.

Our friendly hotel man said to avoid the pier for lunch – however I ignored him as on Tripadvisor (review OCD clicked in)  they rated a little shack named The Santa Barbara Shellfish Company. This is right on the end of the pier and they do whole  fresh crab to the table and it sounded fun! It’s a funky little place, you stick your name on a list and then hover about waiting for your named to be called by a cool, tanned Californian waitress lady. You can actually order from a little window at the side and then sit on a bench outside if you don’t have time to wait.

I have to admit after sitting down and seeing all crabs in the tanks I felt bad – and it didn’t feel so fun anymore! Still I thought ‘When in  Santa Barbara’ and put on my brave face. 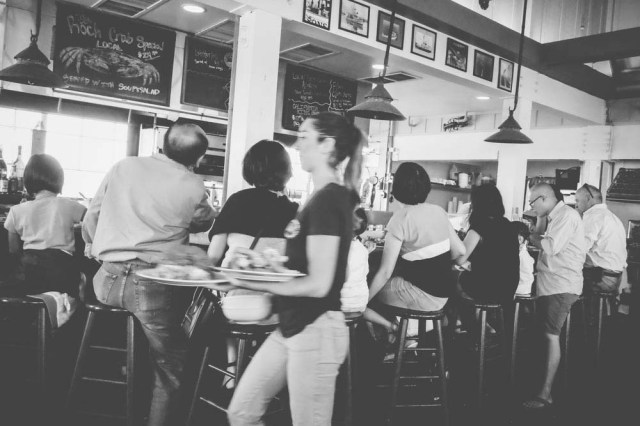 I ordered some local crab (I cant remember the type maybe a decapod crustacean expert can let me know?) with a onion rings a side salad and a clam chowder. Leigh ordered crab cakes served with coleslaw, and a garnish of onion rings. 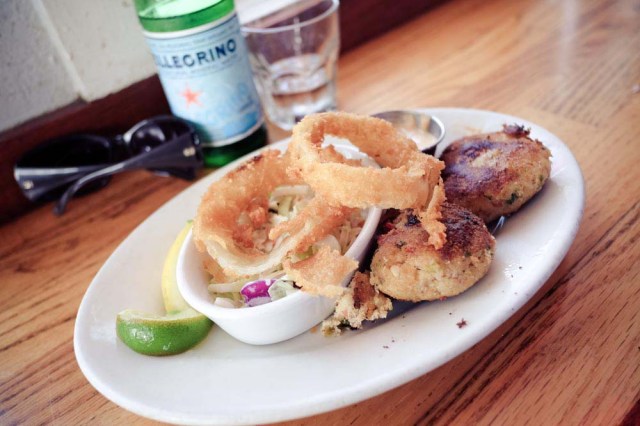 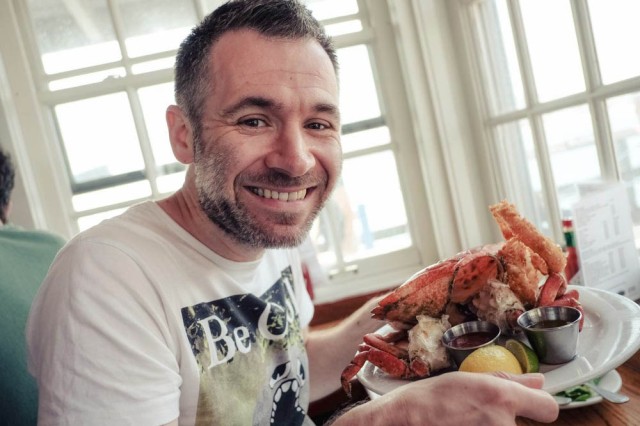 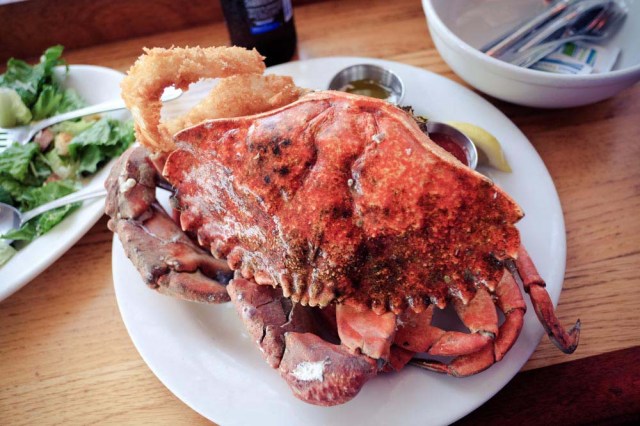 So that’s me with Dave – yup I think he deserved a name. The food was pretty good and it was a cool place (although honestly I did have better crab later in the trip at in The Wynne – Vegas). Sorry Dave.

That particular night we planned to go to The Palace Grill which sounded like a really cool Southern and Louisiana restaurant with live Jazz music. Unfortunately somehow after just laying down for a brief nap on the huge comfy bed the jet lag caught up with us – we both woke after 9pm. Ooops. However we quickly got ready and something good came out of it us over sleeping, we discovered the chain Chipotle. I’d never heard of this chain all though I think they do have them in London. Yeah so it’s fast food but it’s really good fast food, the burrito we had was HUGE and really tasty. I wonder if the UK versions are as good? I’ll let you know next time I’m in London.

We then walked off our carbohydrate overload around Santa Barbara’s  main stretch with all it’s lively bars, cool clubs and boutique shops.  We stopped in a cool little bar for a couple of cheeky after dinner beverages before heading back to finish off the nap we had started earlier.

In the morning we headed to Sambo’s, apparently Sambo’s used to be a massive chain of restaurants back in the 1950’s and this is the only remaining restaurant. I was intrigued, so after checking Wikipedia turns out that the Sambo’s chain hit troubled times as the name of the store is derogatory to African Americans (the names comes from The Story of Little Black Sambo). Anyway it’s a nice enough place with the feel of what I imagined a real American Diner to feel like with booths and cups of hot strong coffee refilled regularly.  So we filled our faces ready for our next long part of our journey, The Big Sur towards Monterey. I had fresh corn beef hash with eggs and  hash brown and a side of pancakes (what’s with the salty cream on the pancakes??).

Santa Barbara was such a cool place – originally we looked at staying in Malibu but I’m really glad we chose to stay here for a night on our Pacific Coast Highway trek.