So anyway hey all – OK it’s been a while and you might have been worried about where we went? Well don’t you worry we didn’t get lost in Monterey although it wouldn’t be a bad place to get lost eh? Rather I’ve just been super lazy and stopped posting, it’s nothing personal I still have feelings for you.

San Francisco what a bloody brilliant place, we drove in from Monterey via the Bay Bridge which was awesome and then let our Satnav guide us in to our next hotel The Orchard garden Hotel in Bush Street which is right next to China Town. More on that later.

By the way if you want an awesome sandwich visit The Working Girls Cafe which is just down from The Orchard Garden Hotel, it had a big queue which it turns out was a good sign. While we were queueing a local guy recommended the Blackened Red Snapper, it came with chili lime salsa, mayo and avocado and it it was one of the best sandwiches I’ve ever had. Worth finding the place if you’re near by.

So this post is just going to cover our fab late afternoon\evening booking in Alcatraz, it’s worth a post on it’s own. I recommend pre-booking tickets ahead of time if you’re thinking of visiting Alcatraz. The queues for tickets can be large even by British standards and we love to queue don’t we? But also if you don’t pre book you may not even get a ticket as apparently it can sell out in advance. You can buy tickets for different times of the day, we chose the night tour which left at 1755 and has extra guided tours included and also Alcatraz at dusk just feels cool. Note don’t forget your photo ID, if you don’t have it they won’t let you on the boat!! 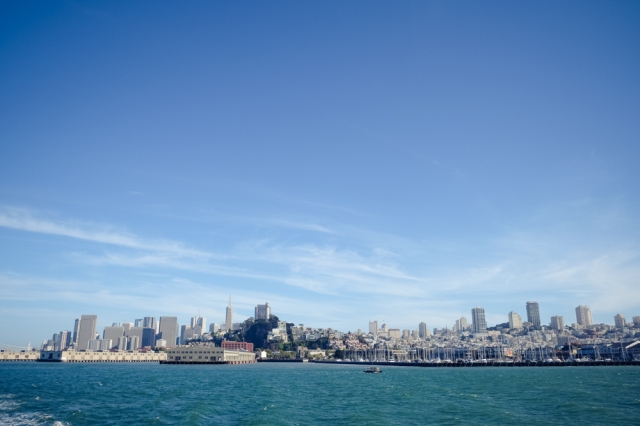 San Francisco skyline from the back of the boat leaving for Alcatraz, it was a clear scorching hot day. 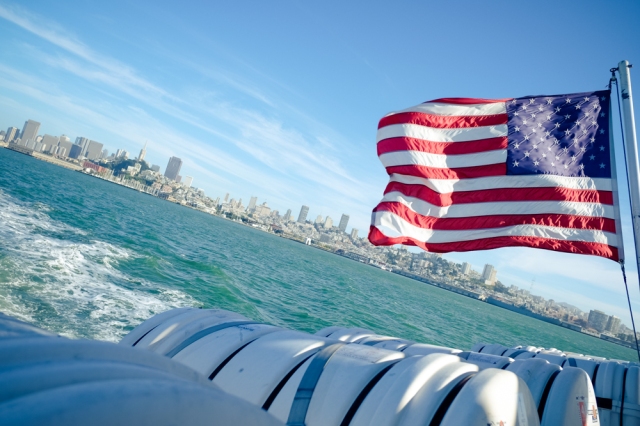 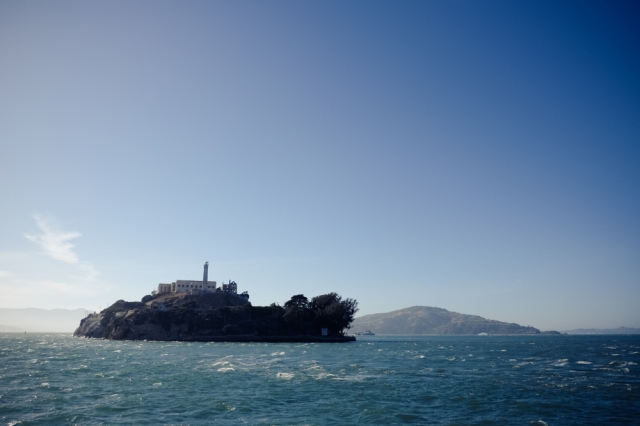 Alcatraz looming, it’s a really ominous looking place as you approach. It may look beautiful here but I could imagine under different circumstances it would scare the bejesus out of a someone with a life sentence ahead of them. The reputation of Alcatraz alone was enough to make most criminals want to avoid a transfer here. It was used for prisoners who continuously caused trouble at other federal prisons. 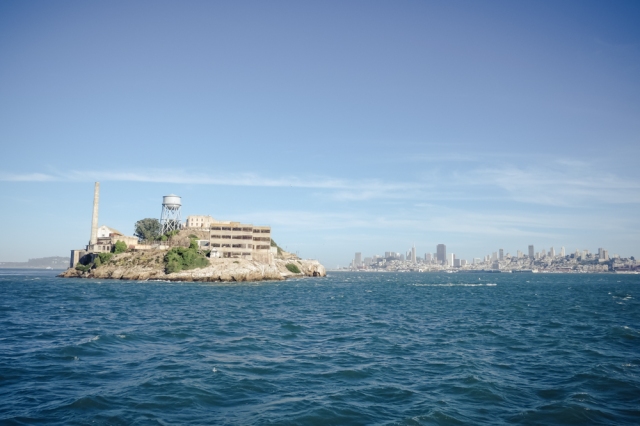 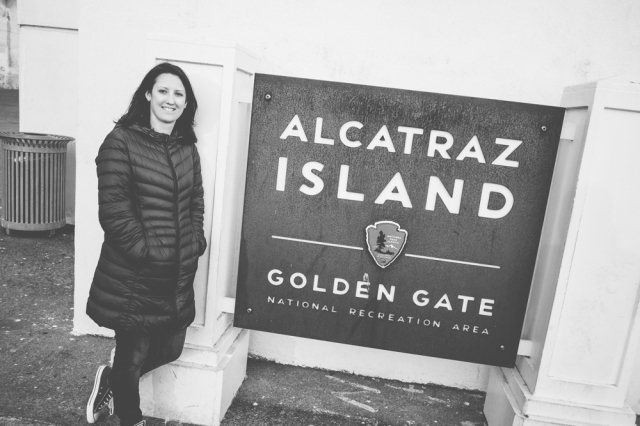 The walk up to Alcatraz after leaving the boat is very cool. 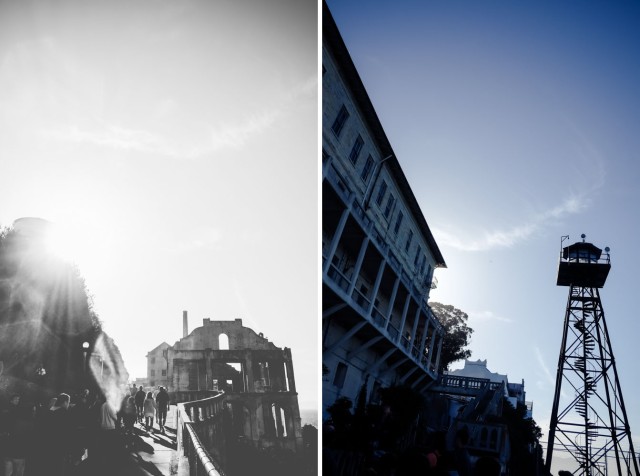 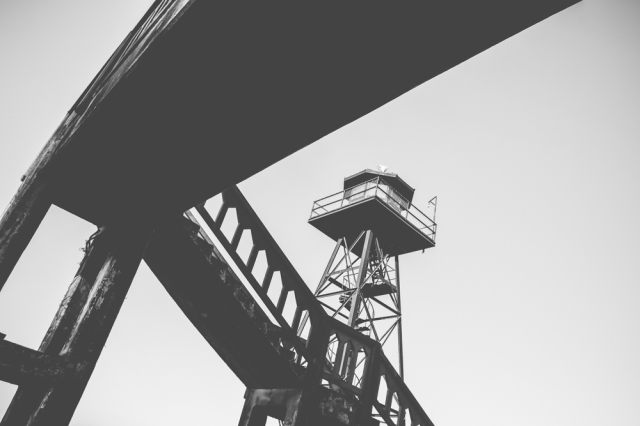 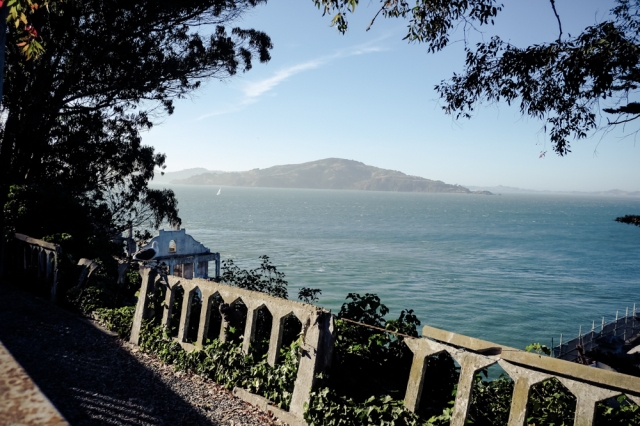 Angel Island in the distance, they also do a ticket which includes a tour of Angel Island. As you continue to walk up to the main cell blocks the excellent guides give talks about the history of Alcatraz. 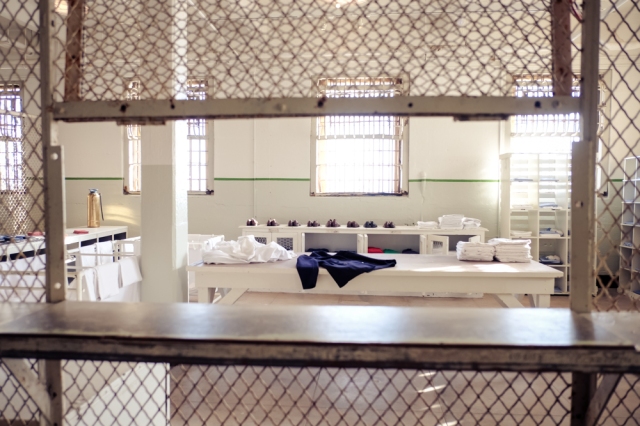 The clothing\bedding store room, as you pass you’d get handed your bedding and clothes for your stay. No chocolates to put on the pillows, tight wads. 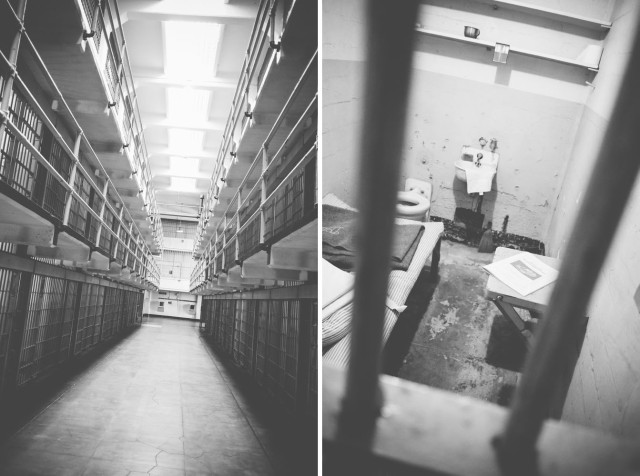 The cells as you enter the cell blocks with a standard cell through the bars on the right. So who has seen Escape from Alcatraz with Clint Eastwood? If not go and watch it now.. go on off you pop. So for everyone else you recognise the cells? It’s very cool. 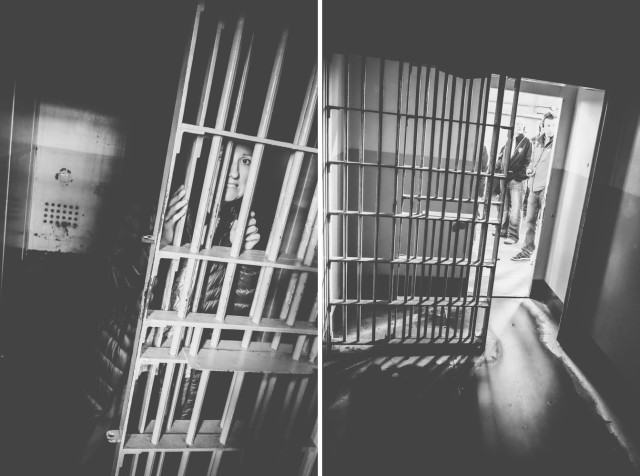 Leighs loving solitary confinement..  this was where you ended up when you misbehaved at Alcatraz. These were pitch black cells! No Netflix or nuffink! 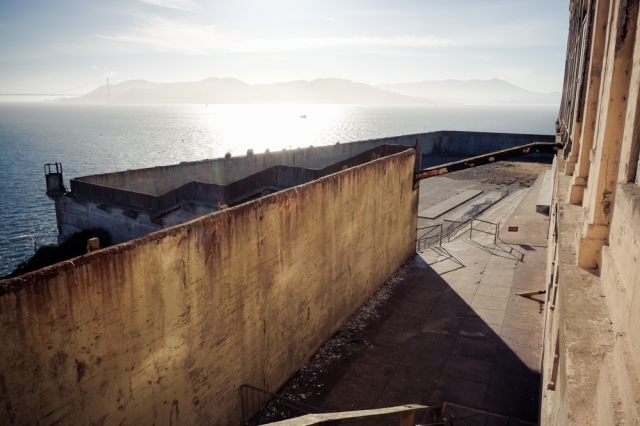 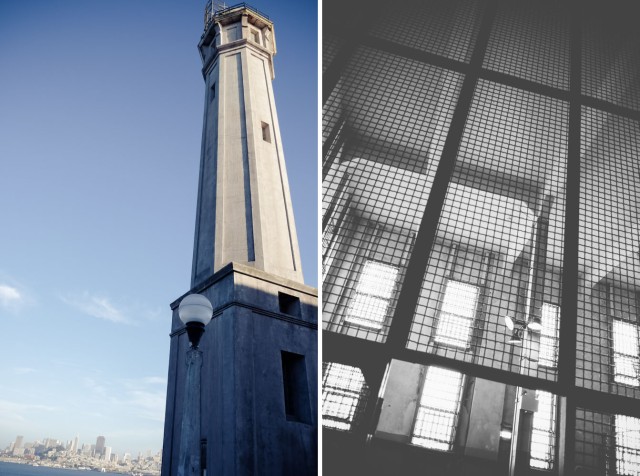 One of the stories the guides tell you about is what is know as the Battle of Alcatraz, this was an unsuccessful escape attempt and resulted in the death of two guards and three inmates.

Above you can see grenade marks on the floor and on the right a device used to widen bars so that an inmate could slip through (I think he had to starve himself also to fit through!).

But if course as we all know from the Clint Eastwood film there was one successful escape in June 1962, above is an example of how they dug out the wall in their cells which were softened by the salt from the sea air. On the right is the area behind the cells that they used to escape.

No one knows if the three inmates made it to shore. It’s believed they were heading to Angel Island as remains of raincoat rafts, paddles were found on the southern shore. The FBI believed it was unlikely they survived due to the water temperature, but as the guides at Alcatraz point out people have survived the swim from Alcatraz to San Francisco many times in recent years. The FBI closed their case against the missing inmates, but the US Marshall service still have an active warrant for all three inmates! Cool story. 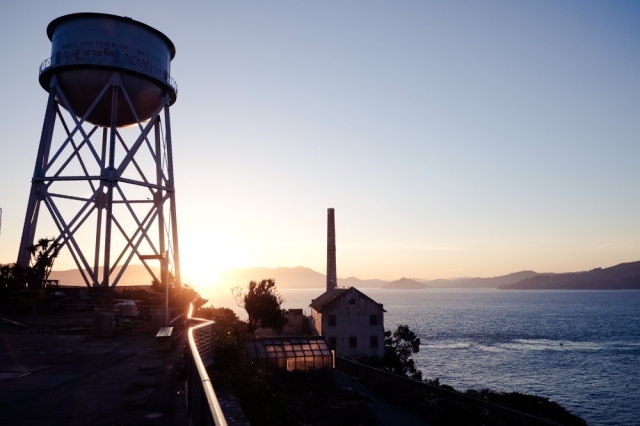 So we walked back to the boat with the sun setting.. we were so lucky with the weather at this brilliant National Park. 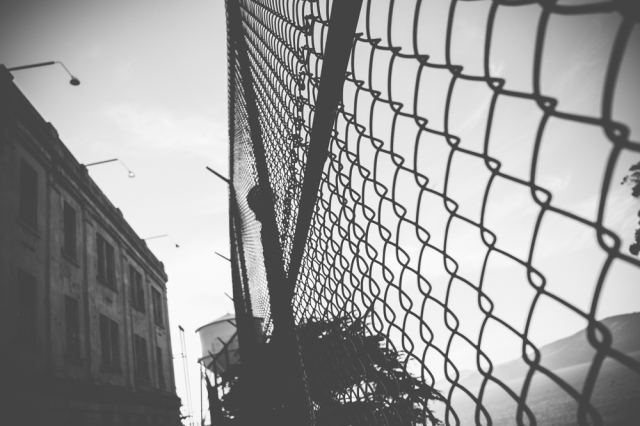 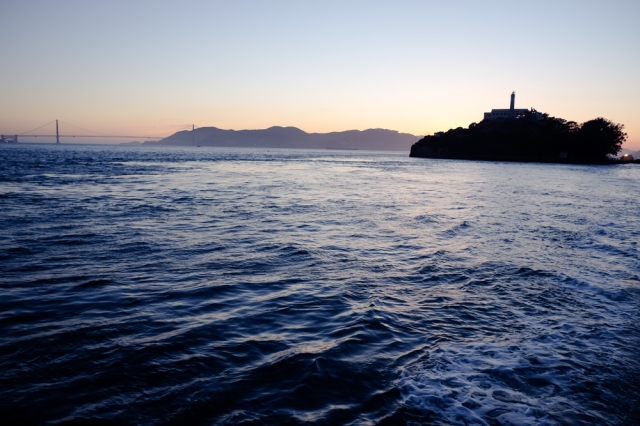 We arrived back at Pier 33 and said goodbye to our Alcatraz boat. 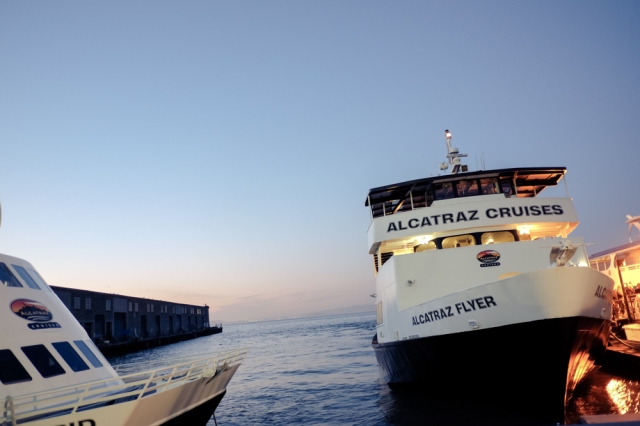 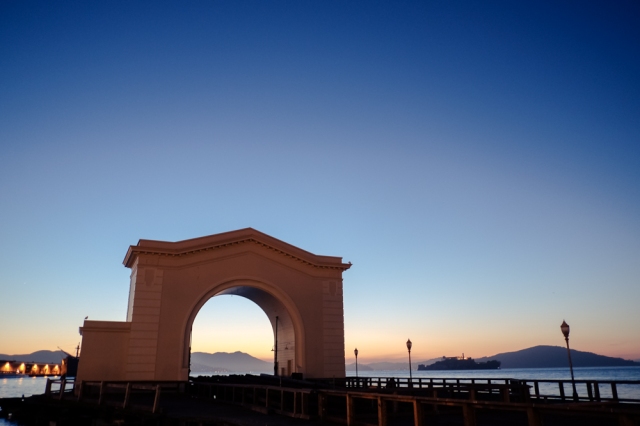 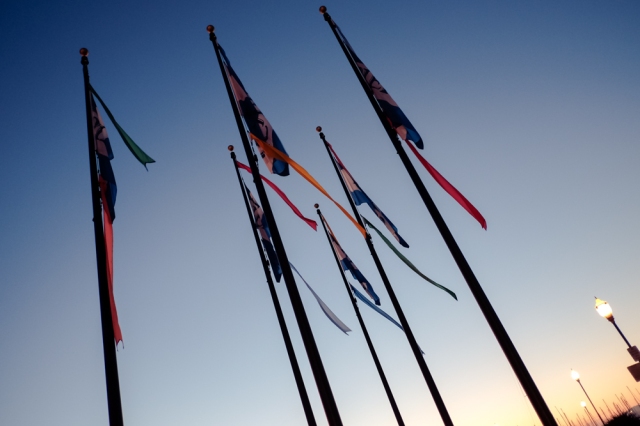 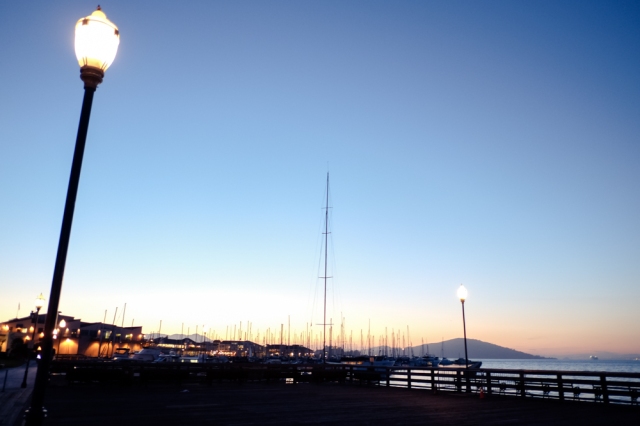 I’m sure there are tons of lovely restaurants near Pier 33…. but yup we ended up at Chipotle! I’m sorry everyone.

Honestly one of the best day trips of our lives.. it’s worth going to San Francisco just for Alcatraz. Cheers guys, speak soon! I promise to not leave it so long next time.