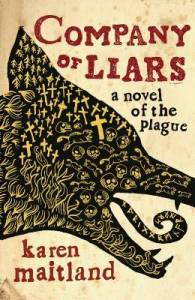 So I decided I’d also leave some book reviews for you guys – now I’d like to point out  (as you have already noticed if you’ve read any of my other post) while I enjoy reading my grasp of the English language and grammar is  probably worse than yours (unless you’re one years old or Britney Spears).

“I’ve never really wanted to go to Japan. Simply because I don’t like eating fish. And I know that’s very popular out there in Africa.”  by Britney Spears

So yeah .. these reviews aren’t ever going to be massively in-depth (or in reviewer speak which I know we all love). I’m also unlikely to go in to a massive amount of details and say “what’s the hidden meaning here fellow readers” or ‘this made me question my love of quilted toilet roll’. In short I’ll probably say “This is crap because….” or “Hey I loved this guys – read it or maybe don’t but if you don’t read it then I’ll shake an angry fist at you”.

So I’ve just finished reading Company Of Liars by Karen Maitland. By the way I get most of my book recommendation directly from friends or I use the Goodreads listtopia feature if I’m really bored and sometimes I just buy stuff from Amazons daily Kindle deal of the day cause it looks good and I’m a sucker for things under a pound! You could pretty much sell me anything for 99p.. email me with any offers.

Company of Liars is medieval historical fiction and it’s written around the time of the plague in England – a time and subject which I was not at all familiar with. The story begins well I liked the main character and I liked the writing style, the characters are put together pretty well and there is an air of mystery through out the book. The detail in the book suggests the author has done her research well and shows skill in letting you know about it. In fact it carries on being good until about 80% way through…  then I can only imagine the author saw something sparkly outside through her window. “Oooohhh sparkly” she may have said and must have then rushed the ending of the story to get outside and check out said sparkly item.

I’m not going to spoil anything for you by going into to too much detail but for me the ending  just didn’t work and I was left feeling disappointed (if it were a physical book rather than a Kindle I may have slammed it down on my bed side table and let out a sigh). Still the other three-quarters of the book were good as I mentioned so I didn’t feel too robbed.

At the back of the book the author goes into details on the historical accuracy of the content (I always like this section). I’m not sure about you but I feel big and clever when I read historical fiction. As well as being entertained I take in some historical events that did happen mixed in with a little bit of what may have happened and then bore everyone to death at work with what I have crammed in my head. I don’t think I impress anyone but I feel like I’m making up for being an idiot at school.

Anyway if you’ve read my review or if you’ve just skipped to the bottom of this post – I’d give Company Of Liars by Karen Maitland – 6/10.