We left Dante’s View and we were then rocking towards Vegas, the drive took a couple of hours. It’s quite an experience driving from Death Valley as you really appreciate that Vegas really is in the middle of a desert. So as we worked our way around the desert roads and Vegas finally appeared in the distance we whacked the Elvis music on the stereo, Viva Las Vegas baby! And then A quick stop at the sign.

Check out Elvis above, he was helping to take photos and posing for people.

We then stopped of at the Las Vegas Premium Outlet-South, Leigh got some Ray-bans with a nice discount compared to the UK and I got bagged some white Converse for about a tenner! We then headed to Alamo to drop off our trusty car as we had no more driving left to do. While this meant I could now relax a bit more I was sad to give the car up, we’d flown in to LA a couple of weeks ago with me worrying a little about how we would get on driving on the other side of the road but I had really enjoyed it. Maybe it’s the California sun but you folks in California seem a lot calmer compared to the UK road rage ridden drivers, people just seemed to be in less of a rush.

So after saying goodbye to our car we grabbed our cases and jumped on a cheap shuttle bus heading to our next stop, The Wynn, posh! Now you may or may not have heard about a legend at Vegas hotels. The legend goes that you should pop some dollar notes in to your passport, then you hand it over to the nice lady or gent checking you in and with a little wink and your best grin and you say “any upgrades available”. I had every intention of trying this, but at the last minute I chickened out (has anyone done this and got any cool upgrades?). The staff do try and sell you upgrades when you check in, we weren’t too bothered but we managed to get an upgrade for free anyway! So we ended up on a nice high’ish floor over looking the Vegas strip which is what we wanted. Maybe it was our British awkwardness that won the check in person over.

So this was our room view.. not bad eh? 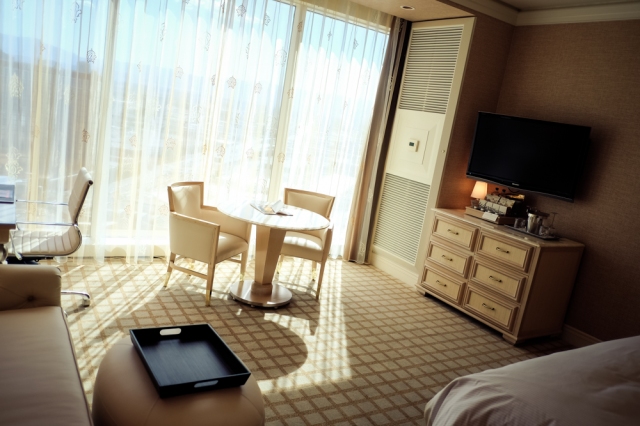 Our room had a nice comfy bed, comfy sofa and a nifty remote control to work the curtains and the lights etc

Here’s our bathroom, fluffy towels and robes, separate shower, lovely deep bath, his and hers sinks. The lavatory was behind me in a separate little room (I was standing in that doorway taking this photo). Right off to explore The Wynn. 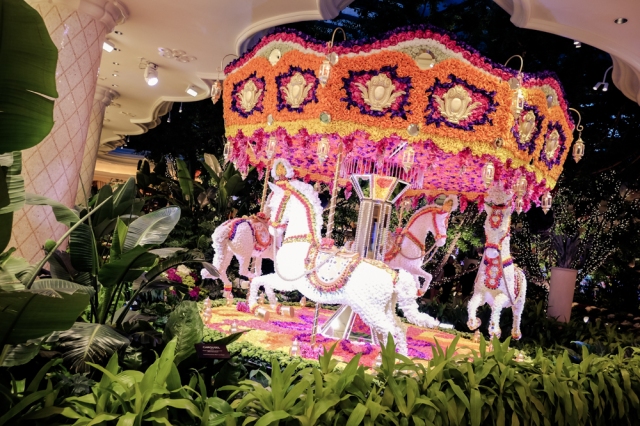 It’s not subtle is it? But nothing is here, The Wynn is actually a little toned down and I think a little classier than some of the other hotels\casinos.

I can’t remember what this was but it was fashion related rather than art. The Wynn had a really posh shopping area – we saw Coleen Rooney in the Dior shop. Not really an A list celeb but it’s the only celeb I’ve ever seen. I didn’t ask for an autograph. 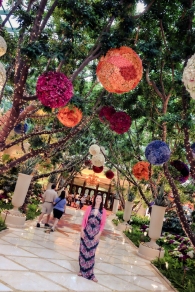 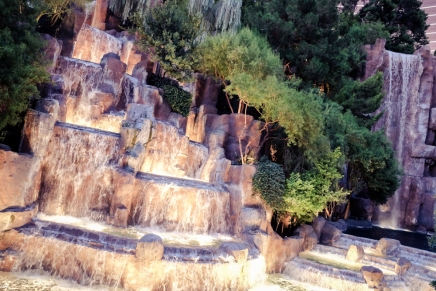 I think the waterfall area above was actually just round the corner from the entrance rather than in The Wynn. I was really impressed with The Wynn, it felt less gaudy than other hotels\casinos and the price to stay was very reasonable. The position was far enough from the centre of the main strip that it was not so crazy allowing us to relax. But it was still in walking distance of the action, if you want crazy and right in the middle I’d suggest a different hotel though. The only bad point was because it’s a slightly posher hotel\casino the minimums in the card games etc seemed higher than the other casinos.

Drinks, more exploring then off to bed for an early start tomorrow. The Grand Canyon!